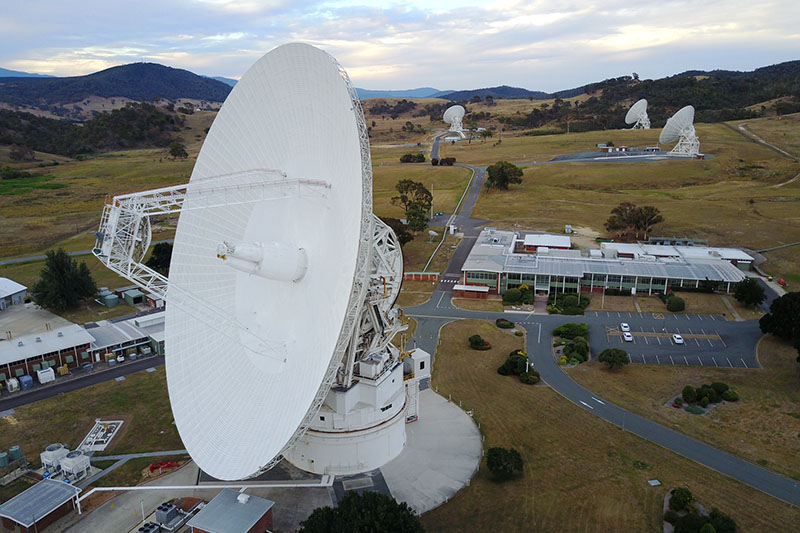 The Canberra Deep Space Communication Complex (CDSCC) features a number of 'big dish' antennas that are required daily to receive data from; and transmit commands to; a wide variety of spacecraft.

The antennas are known as Deep Space Stations (DSS) and are identified by a number. Each location around the world has it own set of similar antennas: In the United States, antennas are numbered in the 10s and 20s series; in Australia antennas are in the 30s and 40s and in Spain the 50s and 60s. This is a simple shorthand way to easily identify an antenna at each site.

The most recent retirement was the closure of Deep Space Station 45. After 30 years of service, the HEF (High Efficiency) antenna was decommissioned in November 2016. DSS-45 makes way for the newer generation of 34 metre, beam waveguide dishes that will be the type of antennas that the Deep Space Network will use going forward.

One other dish - the first you come by as you enter the station - is Deep Space Station 46. This 26-metre antenna was originally located at the Honeysuckle Creek Tracking Station between 1967 and 1981. It was moved to CDSCC as part of a consolidation of tracking station sites in Canberra.

DSS46 is most famous for being the antenna which received and relayed to the world the first historic TV images of astronaut Neil Armstrong setting foot on the Moon in July 1969.

Having tracked hundreds of missions - both human and robotic - DSS-46 was retired from service in November 2009 and now remains at CDSCC as a celebrated and recognised historic monument.

To assist in the busy period in spaceflight at the end of 2003, early 2004, the Complex incorporated the 64-metre dish at Parkes in central New South Wales. This antenna was upgraded by NASA through the Canberra Complex with new receivers and equipment capable of handling transmissions received from robotic spacecraft.

The 64-metre wide radio telescope is one of the world's best and most active facilities for radio astronomy. When its research time permits, Parkes can act as a spare 'ear' for CDSCC at times of high scheduled activity. When it is being used for this purpose it is designated as DSS-49.

The role of the antennas can be broken into four key areas; Telemetry, Tracking, Control and Monitor.

The purpose of the Tracking System is to provide two-way communication between Earth based equipment and spacecraft, to make measurements that will allow the state vector (position and velocity) of spacecraft to be determined.

The purpose of the Monitor and Control System is two-fold: to provide real time monitor data to projects which reflect the status of project support by DSN systems, and to provide monitor and control capabilities to operators of DSN systems' components.

In addition to serving as a communications instrument for deep space exploration, the Deep Space Network (DSN) may be used as an advanced technological instrument for scientific research and development. The DSN makes its facilities available to any qualified scientist on a non-interference basis with spacecraft mission support. The DSN encourages the use of its facilities for those scientific observations that exploit its unique elements and capabilities. This includes collaboration with other NASA and non-NASA observatories.

The DSN anticipates and responds to user needs. The DSN maintains and upgrades its facilities to accommodate all of its users. This includes not only the implementation of enhancements to improve the scientific return from current experiments and observations, but also long-range research and development to meet the needs of future scientific endeavours.